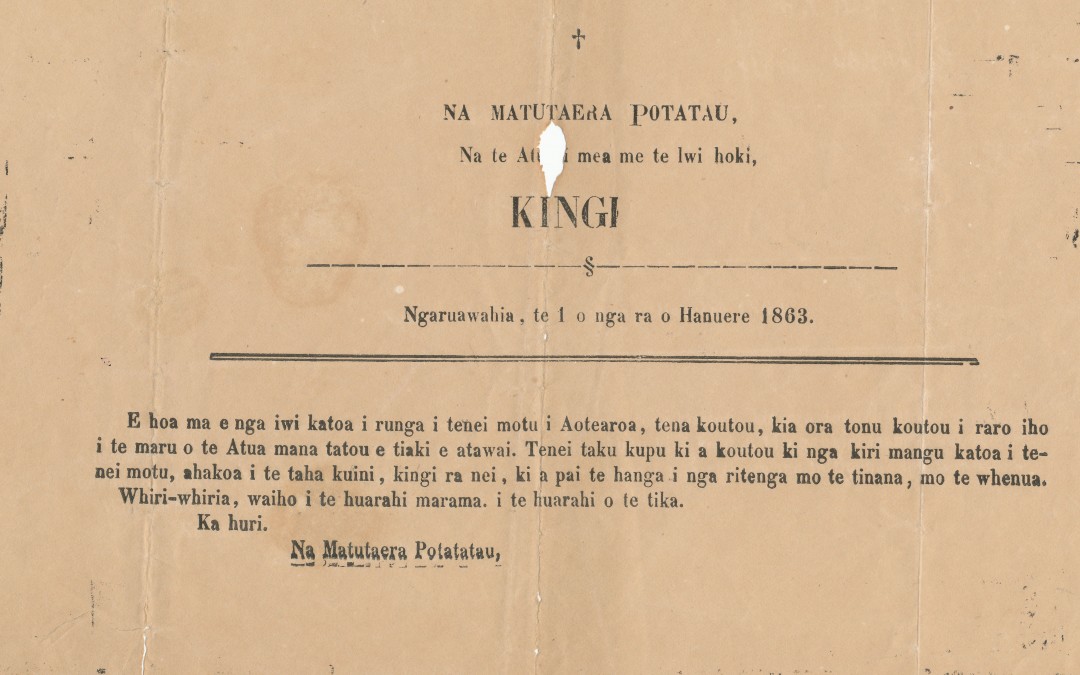 Te Hokioi was part of the printed propaganda battle that preceded, and prompted, the Waikato wars of the 1860s. It was used for several years to print a pro-Kingitanga newspaper called Te Hokioi e Rere Atu Na – or The Soaring War Bird. The newspaper is representative of a wider history of printing in New Zealand, which began when William Colenso set up his press at Paihia in 1835.

The Hokioi press is a considerable cast iron artefact, five feet tall and almost the same wide. It was manufactured In England by Hopkinson and Cope in the mid-1800s, and was later involved in a series of events pivotal to the Waikato Wars. The Austrian geologist, Dr F.R. von Hochstetter, surveyed the colony of New Zealand for nine months in the late 1850s. During the Waikato leg of his survey von Hochstetter met Hemara Te Rerehau of Ngati Maniapoto and Wiremu Toetoe of Ngati Apakura.

In recognition of their generous hospitality they were invited back to Europe in January 1859 as guests of the Austrian government. There they learned the printing trade and returned to New Zealand in May 1860 with a printing press as a gift from the Austrian Emperor Franz Josef.

The press was probably set up at the Hopuhopu mission station, close to Ngaruawahia, and the first issue of Te Hokioi i Rere Atu Na was printed in late 1861. Its principal writer, Patara Te Tuhi , was lauded for his witty prose, and for the early years of the 1860s he argued in print on behalf of the Kingitanga movement — often at the expense of the colonial government. In response, Governor Grey ordered that an opposing press and paper, Te Pihoihoi Mokemoke, be set up at Te Awamutu by John Gorst. After only four issues of the government paper it ceased abruptly. Rewi Maniapoto of Ngati Maniapoto, confiscated the Pihoihoi press and its fifth issue. The government press – along with its editor – was shipped back to Auckland.

The Hokioi press continued to print until the invasion of the Waikato in June 1863, when it was shifted by waka to Te Kopua, near a Wesleyan mission station, for safekeeping. Although it reportedly fell into the river along the way, it was recovered intact. There is some confusion in the record over what happened to the press after it was moved. One account has it that the press was moved to Huntly after peace was made in 1881 and was used to print another Kingite paper, Te Paki a Matariki. However, archives indicate that this was printed by another press, so it seems that the Hokioi press, after its short but turbulent run, languished in a paddock near the Waipa River. As the land surrounding it was converted into a succession of farms the press served a variety of purposes: as a cooking-pot stand for the Searancke family and as a tobacco press by locals.

In 1886 a local man reportedly purchased all of the type to be sold on to Auckland printers— although it was later alleged that the type was melted down for bullets during the Waikato war. Whether or not this happened is debatable – from time to time the successive owners of the property would plow up pieces of type.

The press remained largely forgotten in its paddock near the Waipa River until 1935, when members of the Te Awamutu Historical Society traveled out to the farm, then owned by C. Washer, to inspect it. It was reported to be dilapidated, with several components missing and no sign of the typeset. A reclamation party returned later that year to load it onto a lorry, at which time Augie Swarbrick, then president of the Historical Society, remarked that the feat “clearly demonstrated that historical research is not a matter of mental effort only”. The press was moved to Te Awamutu and stored in the offices of the Waipa Post to await more permanent storage. Te Hokioi has been a part of the museum’s collection for 80 years.