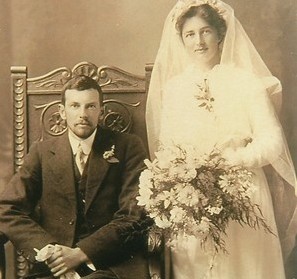 Florence had trained to be a missionary in China but was unable to go there. Instead she became the first sole-charge teacher at Piarere School, 1911 to 1913, living in a tent at the old creamery at the junction of the roads to Cambridge, Matamata and Tirau. About the same time, she was appointed as the Horahora Agent of the Presbyterian Church at Cambridge and she was able to use her Deaconess training to help the workers and residents of the Horahora Dam and village. It was a rough and isolated community with all the stresses that came with living and working there.

This lovely lady met a handsome young electrical engineer – Francis Charles Chase Smale, known to family and friends as “Charley”. Charley met with a serious accident on 11 October 1911 – he was crossing a live wire while carrying a drill that made contact with the wire. He received a shock of 5000 volts which burnt a large hole in one thigh and badly burnt his hands. Dr. Stapley came out to treat Charley then he was admitted to Waikato Hospital. After the doctors had done all they could, Florence took Charley out of hospital and nursed him herself. They were married on 9 October 1916.

In the wedding photo accompanying this story, Charley is seated – probably it would have been too hard for him to stand. The couple lived in Tauranga. Sadly,they didn’t have a long time together – Charley died less than a year later, on 29 August 1917, aged 29. Electricity is a marvellous yet dangerous tool.

Just one of our many archival wedding photographs in our collection. Want to view more? Go online to check out more images: https://collection.tamuseum.org.nz/objects?query=wedding&hasImages=true